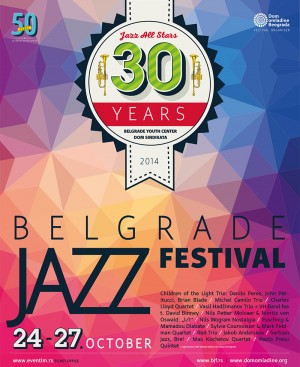 It is unique for a cultural event to reach its 30th edition and to last over forty years. This fact alone makes Belgrade Jazz Festival stand out among other international cultural events in our country. Founded in 1971, our oldest and most respected jazz festival could not avoid the great attention from the public throughout the world, where such anniversaries are just as rare occurence! We are proud to announce that Belgrade Jazz Festival has just been accepted into Europe Jazz Network, as the only event of this kind in our country.

We could not have imagined a better present for the anniversary – once again this entry confirms that Belgrade Jazz Festival enjoys best reputation on the world jazz scene, as well sa as that in our country, it fulfills its mission of promoting the musical arts, being one of the leading cultural events in Serbia. This is also a great compliment, not just to the people who created and organized Belgrade Jazz Festival in the previous decades, but to all the participants on the local jazz scene, comprising all generations and styles, as well as special encouragement for the youth that will continue the festival and carry its torch in the future.

On the opening ceremony of the 30th Belgrade Jazz Festival, in the Great Hall of Dom omladine Beograda on October 24th, public will encounter the spectacular Children Of The Light Trio, made up from today’s best instrumentalists: Danilo Perez on the piano, John Patitucci on the bass and Brian Blade on the drums. This all-star combination will present their vision of timeless standards, in a club-like atmosphere characteristic of intese jazz gig. This group already captivated our audience with a different repertoire, when they performed as a part of Wayne Shorter’s legendary quartet on the opening of Belgrade Jazz Festival in 2010.

On the closing ceremnony of the 30th Belgrade Jazz Festival, on October 27th in Dom sindikata, we take a symbolic time travel to the place where the festival begun in 1971! That evening, as a double bill, we are presenting to the audience two of the biggest stars of this year’s festival: Charles Lloyd Quartet, whose concert in 2011, according to the critics, was the best performance since the renewal of the Belgrade Jazz Festival, which is why his current project Wild Man Dance Suite was rightfully included in the anniversary program. More than anything, he is one of the essential visionaries in jazz music of its golden age, an author who is still active and is contributing to the discovery of the new jazz directions. That same evening, we have a long awated date with a virtuousic pianist and composer Michel Camilo! His Trio represents the best of Latin jazz that can be heard on the concert stages throughout the world. Peforming for the first time in Serbia, Camilo will take us through the history of Latin sounds in combination with outstanding improvisations. Certainly, it is a fantastic way to end the anniversary edition of the festival – on one’s feet, dancing to the hot rhytms of the Carribean!

During 30th Belgrade Jazz Festival, the audience can expect more than ten concerts from the popular jazz artists from the USA, Italy, Germany, Switzerland, Austria, Denmark, Portugal and Serbia, who will perform in Dom omladine Beograda. Special program units that we want to turn your attention to are Germany in Focus and European Vertical. We are particularly proud of the program Germany in Focus, realized in collaboration with Goethe Institute, that will present on October 24th a sensational futurist jazz project 1+1, starring Nils Peter Molvaer, famous trumpet player from Norway, and Moritz von Oswald, playing electronic instruments, also a member of a visionary Berlin collective Basic Channel, who revolutionized techno music by introducing dub elements in the 1990s. The next big name is Nils Wogram and his trio Nostalgia, who behind an old Hammond B3 organ, along with renowned drummer Dejan Terzić, investigates the new paths of jazz with strong base in rhytm, providing us with an insight into ways in which thinking about the future type of this music is headed on the biggest jazz scene in Europe.

We are pleased to present to our audience on October 26th, in coproduction with Italian Cultural Institute, one of the most distinguished musicians in European jazz in the last couple of decades – Paolo Fresu and his original Quintet. Fresu is celebrating 30 years of work on the 30th Belgrade Jazz Festival, with the selection of the best Italian jazz musicians of his generation. Bearing in mind the popularity of Italian jazz in our parts, it is evident that we can expect yet another great evening in the melodic mood!

Each year the Festival is full of discoveries – this time we are turning the attention to the unique Afro-jazz project of Austrian saxophone player Wolfgang Pusching and Mamadou Diabate, great virtuoso on West African instrument balafon, which is going to bring the audience to its feet on October 25. Next day, as a part of European Vertical, several great talents will performs: one of the most important names on European jazz scene – Sylvie Courvoisier from Switzerland, whose captivating piano sounds in collaboration with Mark Feldman, close artistic companion to the legendary John Zorn and one of the most distinctive violinists today, represent a vital blend of European and American school. Red Trio from Portugal is considered to be the best contemporary free jazz group in Europe today, which you can see for yourself on October 26, while on the same evening Jacob Anderskov from Denmark will present his creative expression accompanied by strings, exemplifying continually fresh and innovative Scandinavian jazz.

Jazz All Stars are also represented by local musicians, whom we are proudly presenting to the world. Vasil Hadžimanov will perform on the 30th Belgrade Jazz Festival in the acoustic setting with his Trio, as well as with full VH Band. The audience will hear special festival project, as a part of which Hadžimanov is collaborating with a distinguished American alto saxophone player David Binney. New forces are represented by groups, which have attracted the most attention of our audience between two festivals – popular and well-loved Serbian Jazz Bre! and exceptionally serious project Max Kochetov Quartet.

Patrons of 30thBJF: The City of Belgrade – Secretariat for Culture, Ministry of Culture and Information of the Republic of Serbia